HAVE YOURSELF A CRIMBLETASTIC THINGY . . . 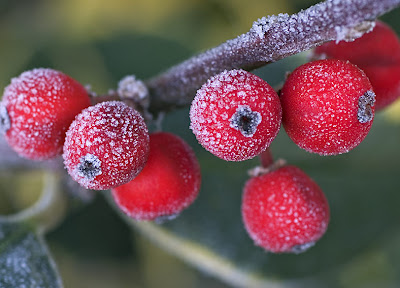 Ilex aquifolium  'Golden van Tol'
What is this dreadful word Winterval?  I won't have a bar of it, I won't, I won't!  Who coined it? Woolworths?  The world's Bankers?  It's smarmy and horrible, a loathsome politically correct mongrel!  Almost as cringe-making as 'Crimbo' or 'Crimble.'
I wanted to wish everyone a very merry Christmas, but I'm told that could be offensive for some reason, so I've been torturing my brain to come up with a suitable name for midwinter merrymaking.   I gather that quite a few people did Yuletidy things – hung up holly, kissed under the mistletoe and gave gifts – long before the birth of Christ, so I presume all the feasting has something to do with celebrating the winter solstice.
So I've come up with the perfect PC greeting.   Since 'perinatal' means 'the time immediately before and after birth,' I thought a similar word derivation might do for the period immediately before and after the winter solstice.  I admit that the result sounds a bit like intestinal movements but that, after all, is what goes on rather a lot, when one's eaten turkey, plum pudding, Christmas cake, mince pies etc. etc. etc.
So here goes:  Look below the picture for your brand new, perfectly PC, seasonal greeting –
'Lo, how a rose e'er blooming. . .' 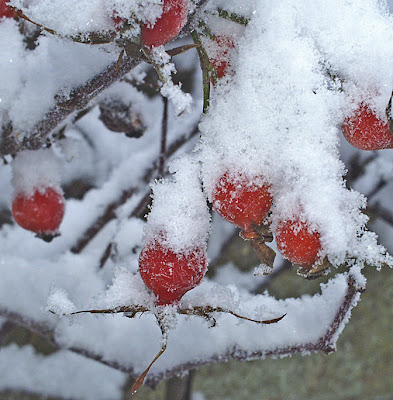 Rosa 'Scharlachtglut' in snow.
A VERY HAPPY PERISOLSTICE TO YOU ALL!
And just to stick to the anatomical, may I also wish you, for the 1st of January, 2009,
a joyful Circumcision.  Ouch!  But I trust you get the point!
'In the bleak midwinter, frosty wind made moan,
Snow had fallen, snow on snow .  . .' 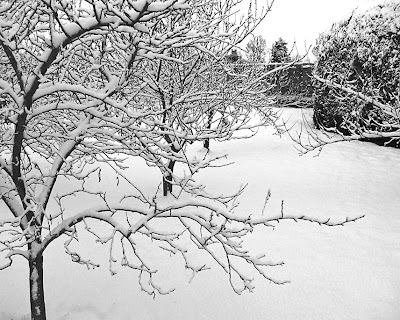 Snow in the apple orchard at Careby, circa 2000
I'll be back in the blogosphere, subject to not being scragged by grandchildren, alcohol poisoning and the Credit Crunch, early in the New Year.  Until then. . .
Posted by Plant Mad Nige at Friday, December 19, 2008